The 7 Domed or Gombuz Mosque or Saath Masjid is our Club Mascot representing a significant feature of the original home territory of our club.

Learn More about the Structure
The Saath Masjid was built around 1680. It was a riverside mosque.  It must have been impressive, as you can see from the etchings made by Sir Charles D'Oyly in 1814. Today, we are a Metropolitan Club with membership from all over the city. At the time of our Charter, we had to have a definite territory which was not taken by another club. Shyamoli was available and this mosque is perhaps the olldest surviving edifice. 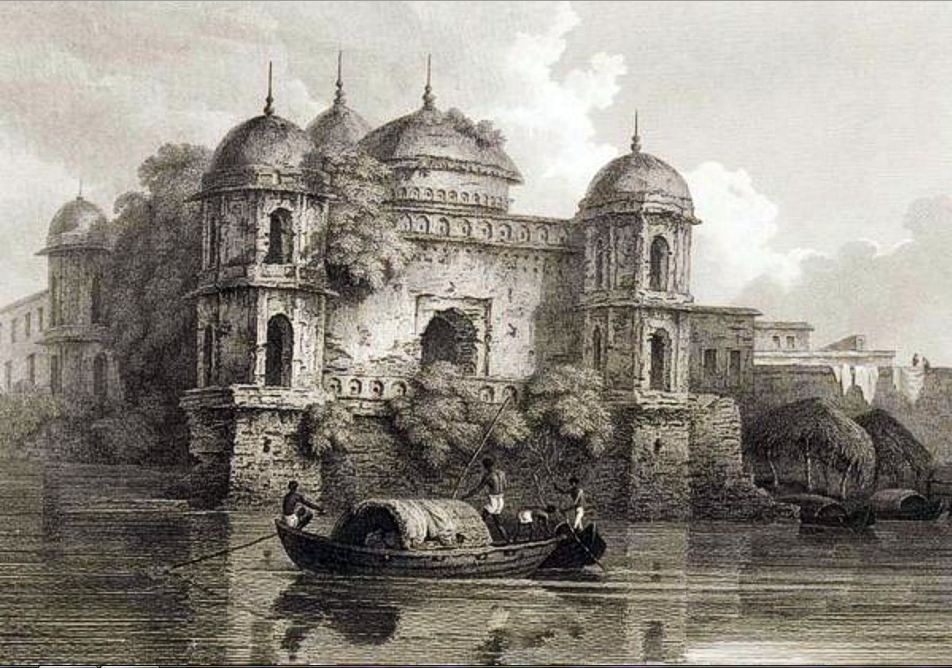 Dhaka, the capital of Bangladesh is an old city. Historically, a mosque was not only a house for prayers but it was a centre of community. Meetings and discussions about affairs of state, science and metaphysics were discussed in addition to routine prayers. Mosque was also a sanctuary for the ill treated, disadvantaged, and dislocated. We were happy to adopt this icon of service and solace in our territorial home in an era that seems so innocent today. The radicalization of Islam had not affected Bangladesh at this stage in 1986. It still has not, but it has taken a strong grip around the world. The people of Bengal, which comprises of Bangladesh and the Indian states of West Bengal, Orissa, and Assam have always been self sufficient and solvent. Nature has been kind and agriculture was easy and profuse. This surplus made the population relaxed, easy going and curious to explore arts and crafts and design for aesthetics. Bengal became famous for its fine silk and cotton. The muslin or the damascene muslin so treasured in the West, originates in Bengal and travels through the silk route to the world.

In the 1750's when the East India Company took over Bengal. Bengal was paying a collective tax in silver coins equivalent to US$ 124 Million when the GDP of Great Britain was US$1,000 Million or a Billion in silver price based on the price of silver in 2012. East India Company stopped trading and became an agent of the Mughals to collect this tax and realized another US$124 Million in collections for the company. Within a 100 years the Mughals were overthrown and the British Aristocracy grew impatient with the upstart wealth of the company men and nationalised the East India Company and began a colony to appropriate the taxes earned in Bengal directly to the exchequer of the British Government. Britain was enlightened and wanted to bring greater equity and law and order in the affairs of India. As such the modern state of India and the other nations of South Asia are a by product of the Modern and liberal British rule. The East India Company has the distinction of being only corporation or a company to spawn an empire. It is doubtful, if such a success can ever be achieved again.

The tax burden was heavy on the people of Bengal. It would usually absorb the entire monetary liquidity of the area. By February, every year, the population would become illiquid. But they always had enough food, other commodities like cotton and silk to experiment with designs and sell them between June, July  and August to become flush in cash to buy some necessities and pay their taxes in December, January.

The food surplus, mild weather, and the annual liquidity crisis made people creative and self absorbed. Therefore, the people of Bengal  are reflective, have a flair for poetry, diverse and complex culinary tastes based on many combination of spices. Simply, they had the time and leisure to explore their environment and be creative. These easy going characteristics still prevail and in a modern industrial state with regimentation and rigorous direction make them appear to be lazy and uncommitted. But still, there have been 3 noble laureates from a population of 200 million. There are over 1200 works of non-fiction published, every year.

Starting to write about our Mascot, I have written a broad description of a Bengali and Bangladesh. I hope, my fellow Bengalis and Bangladeshis will not feel misrepresented. And our international readers will find it amusing, reassuring and interesting to explore and interact with us around the world and visit us in Bangladesh.